'Half-Light was written and recorded between the Spring and Summer of 2015. The album consists mainly of an amalgamation of textures created by a virtual analogue synth and a Weinbach Upright Piano. First few tracks entail minimalistic guitars reverberating coherently with ethereal timbres, these will later on develop into piano-oriented motifs. Half-Light closes off with synth textures blended together with field-recordings creating a soothing soundscape. All songs written, arranged, performed, mixed, mastered and produced by Robert Farrugia. Special thanks go to Samwel Mallia & Ben Mifsud Joslin for the constant feedback given throughout all stages of this particular release. Album art by Luke Azzopardi, photograph taken during the Summer of 2013 at Mellieħa, Malta. Thank you goes to Phil Edwards of Assembly Field. Thank you for listening.' – Robert Farrugia 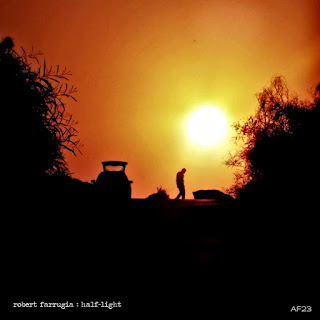