‘East of Evening was an experiment in stripping my sound
down to the barest bones. After years of using layered
and sequenced electronics, I spent 2012 returning to my
roots in playing acoustic instruments and this album
took it to its limit. The original 10 track cassette edition,
released in a single-figure edition in early 2013, featured
only guitar, piano and field recordings - both raw and
treated - plus spoken word on one piece. This expanded
edition features four previously unreleased tracks,
including two which feature a Korg MS2000. I have never
been a summer person but something I love about those
warmer months is the stillness of a summer evening.
East of Evening is inspired by that most serene time of year’
- Ross Baker 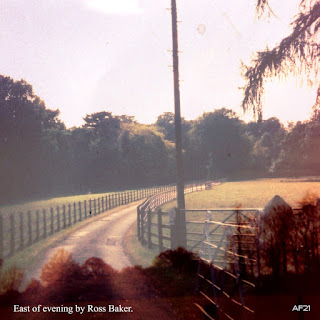